As blasphemous as it sounds, that’s enough powder for one season. Who isn’t ready for some warm, sunny weather, and some good corn skiing?

Corn skiing has nothing to do with making turns on a slope in Nebraska, if there even are any slopes in Nebraska? It’s about the optimal spring skiing condition. It’s about that feel of carving high-speed turns on a butt-smooth backcountry snowfield, which can be just as exhilarating as floating through thigh deep powder in January. 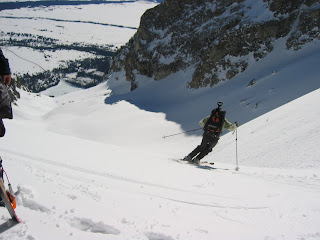 The term “corn snow” comes from the kernels of frozen snow grains that break loose off the surface of the snow when you apply your edges in a turn. These rounded, melt-freeze snow grains, often about the size of corn kernels (thus the name), trickle down the slope ahead of you.

The corn is best when the sun just begins to heat the top quarter-inch of the snow surface. You can carve a turn like you would on a groomed slope at a ski area. Except this condition is happening in the backcountry, on the un-skied, smooth slopes, groomed by Mother Nature. (Photo of spring skiing in Grand Teton National Park).

To get good crop of corn in the mountains, several things need to happen in unison. Or else, either the crop won’t grow, or it will become damaged. Sunshine is not the only weather factor corn relies on. Cloud cover and overnight temperature are also critical. Additionally, you cannot have had any recent new snow.

To really know if the weather is “growing” a good crop of corn, pay attention to the recent weather and the forecasted weather. Here’s a corn crop checklist and some explanation for each.

2) A spell of warm and sunny weather.

4) Below freezing temps in the morning, at all elevations in the mountains.

5) Sunny or Mostly Sunny skies during the day

1) No new snow: An inch or two of new snow will take a day or two to melt down and re-freeze. Ten inches of new snow may take 5 days to cook down to a good, solid frozen surface.

2) Warm and Sunny: First you need a stretch of warm temperatures and lots o

f sunshine to melt the snow, and start cooking up the corn. That’s the melt part of the melt-freeze cycle that makes a melt-freeze crust. If you don’t have wet snow on the surface during the day, it just won’t be real corn the next morning. It’ll just be a hideous suncrust. There’s a difference! (Photo of Melt Freeze Grain Cluster)

3) Clear skies overnight: You must have clear skies overnight to let the wet snow consolidate back into a frozen crust of rounded melt-freeze snow grains, all glued together. Even a thin overcast layer of high clouds can cause the snow to not re-freeze completely. This is because the clouds act like a blanket, insulating the snow and holding in the heat. Actually, what is going on is, at night the out-going radiation from the surface of the snow gets re-radiated back to the earth’s surface. As this radiation is reflected back down to earth by the cloud bases, it inhibits a solid freeze.

4) Below Freezing temps: It must get to at least 32 F or 0 C overnight at the elevations you want to ski. If not, the corn won’t last long and you’ll be punching through the crust or leaving deep ruts in the slush.

5) Sunshine during the day: Cloud cover in the daytime can also have a negative effect on the corn by not letting enough sun in to properly melt and loosen the bonds between those melt freeze snow-grains. If the sun isn’t hitting the slope, you’ll end up just skiing a frozen ocean that never softens into good corn snow.

Rule-of -thumb is: If you can’t see any stars before you go to bed, you probably don’t need to bother getting up early the next morning to ski corn.

Corn-snow farmers must rise early to hit it just right. East facing slopes will cook first, and after about 9:30 a.m. most spring mornings they are usually done. Due-south facing slopes might last until maybe 10:30 a.m. Southwest facing slopes should be ready around just before noontime.

It’s better to be there on top and have to wait for the corn to go-off, than it is to arrive too late and miss the good stuff. And then experience the embarrassment of leaving behind deep ruts in the wet snow that will take many days to heal back over to a smooth slope. After all, this is all about seeking out a smooth, untracked, snow slope to truly experience the thrill of corn skiing.

1 thought on “Waiting for a Good Crop of Corn”