It has arrived, the first snow of the season, and it is only Oct. 6th. An unusually cold Low pressure system covering most of the Western U.S. with a huge counter-clockwise circulation around it, brought snow this morning to the valley floor in Jackson Hole. Generally about 2 inches in the valley, with maybe 6 inches at higher elevations, but not too much more than that at this point (end of day Thursday). But before it is done later Friday, there might be 10 or 12 inches at higher elevations in the Tetons.

This storm began putting down some decent snow in the Sierras the day before. And temps were cold enough aloft to bring snow down to fairly low elevations. Even Salt Lake City at 4500-ft. had a couple of inches of snow today.
This is all coming after about a ten-day stretch of nice Indian Summer weather in late September and high temps in Jackson hitting 80 degrees just one week ago!
Below are some pics from webcams around the region showing the new snow today:
Town of Jackson & Teton Pass 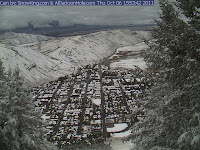 Compared to Last Fall
Last year we had our first good snowfall in the mountains on September 10th, with almost 12 inches at 9,000 to 10,000-ft. in the Tetons, but snow levels only reached down to around 8,000-ft.
Then it went warm and dry for a month, until October 23rd when it snowed to the valley floor and ended up throwing down 2 to 3 feet at the higher elevations over the course of 4 days. And of course the rest of last winter is legend. It never really stopped snowing until sometime in June!! “Viva La Nina”, the skier’s chanted.
Well, it looks like they may get their wish…….
La Nina Update
The latest update to the ENSO forecast came out today…………read all about it first hand by going to the bottom of this page ….NWS Discussions & Outlooks ….and click on current the ENSO Discussion or peruse the long range outlooks or go to the La Nina page and learn more about the phenomena to impress your friends during Apres Ski.
The short of that report is: La Niña conditions are expected to gradually strengthen and continue through the Northern Hemisphere winter 2011-12.
It goes on to say that this one is not as strong as last year’s La Nina.
So, while it may not be as strong, it is at least showing a trend of sticking around through the winter, which should be good news for a more northerly storm track that favors the Northwest and Northern Rockies especially.
We will forever equate last year’s La Nina with bountiful powder that went on and on into the spring. That will be what we expect all La Nina’s to do. And that is simply not the case. Just like the proverbial snowflake, no two La Nina years are ever exactly alike, but the odds at least favor an above normal snowfall winter.