In my 25 years of forecasting the weather for Jackson Hole and the Teton Mountains, I have never experienced a forecast period that was as big a bust as this past week. Between the Christmas and New Year’s Weekends, as much as two feet of snow was forecast, and less than 6 inches accumulated.

In my more than 30 years as a meteorologist I cannot recall a time when the computer models were this far off in their guidance. Not just one model, all of the computer models that I consulted (7 different ones) had forecast copious amounts of moisture and mountain snowfall. They were all wrong. Thus, so was I.

In a December without much snow, the promise of a big dump is taken seriously in a ski town. And, I don’t take it lightly when it doesn’t materialize. Especially when it seemed to be a sure bet that the Teton Mountains would get plenty.

Maybe not the huge dumps like we were getting last December (2016), but in relative terms, a foot of new snow means a lot.

The first busted forecast was on Wednesday, December 27th. I had forecast 3 or 4 inches in the mountains during the day and another 2 or 3 inches Wednesday night. I figured over that 24-hour period the Tetons would see between 5 and 7 inches of new snow above the 9,000-ft. elevation. The mountains got one inch or less.

The next round of moisture was scheduled for Friday and Saturday, December 29 and 30. I had forecast 4 to 6 inches during the day Friday and another 2 or 3 inches of snow Friday night, for a total of between 6 and 9 inches for the 24-hour period. Some mountain locations got 2 inches, others received just a trace.

On Friday morning, it looked like the jet and the colder air to to the north of us would finally shift further south. After painstakingly scrutinizing all the models (about 7 different ones!), they were all very consistent in forecasting more than a foot of new snow over the next 48-hours.

I decided to go with 5 inches during the day Friday, a break Friday night, then another 5 inches in the mountains on Saturday, as a cold front pushed through.

The mountains got 2 inches at the higher elevations, for the 2-day period.

Instead of, “third times a charm”, it was “three strikes, you’re out”.

All total, from Wednesday morning December 27th to Saturday afternoon December 30th, 2017, the mountains around Jackson Hole received only 5 to 6 inches of new snow.

The computer models had anywhere from 18 to 30 inches of snow forecasted for the same time period in the Tetons. 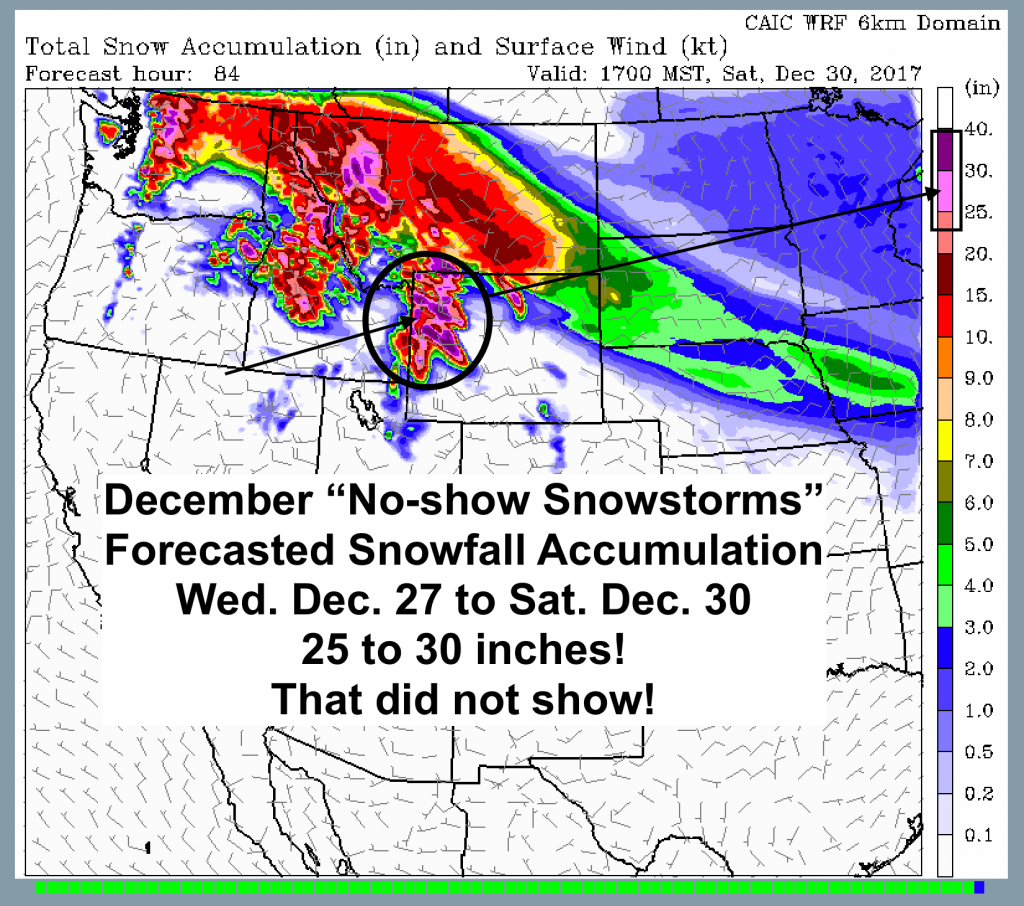 An example above of a Hi-resolution snowfall model that went bust.

It is frustrating when you have a consensus in all the models, and then they all fail. The weather models available today are more numerous and more sophisticated and have way more data inputted into them, and the detail in the output is far superior than anything I had to work with 25 years ago. It makes me wonder, how can they be that far off in their predictions?

On many days, there is variability from one model to another, especially where precipitation amount is concerned. On those days, you work with the model that has been performing or initializing the best. However, on days when all the models are in agreement, your confidence as a forecaster goes up, because that must be what is going to happen!

In this case, all that confidence evaporated, literally, as hardly any of that forecasted new snow materialized, compared to the amounts the models had predicted.

It is the worst thing that can happen to a forecaster. We call it, the “crying wolf syndrome”. If you are wrong too many times, the public stops believing what you say. It’s crushing when you are wrong.  Rather than “crushing it”, when you are right.

I hope this was an isolated incident and that I can regain some confidence in these models in the future. But after 25 years in the forecast saddle, I have to say, that I was ready to just give it up after this past week. 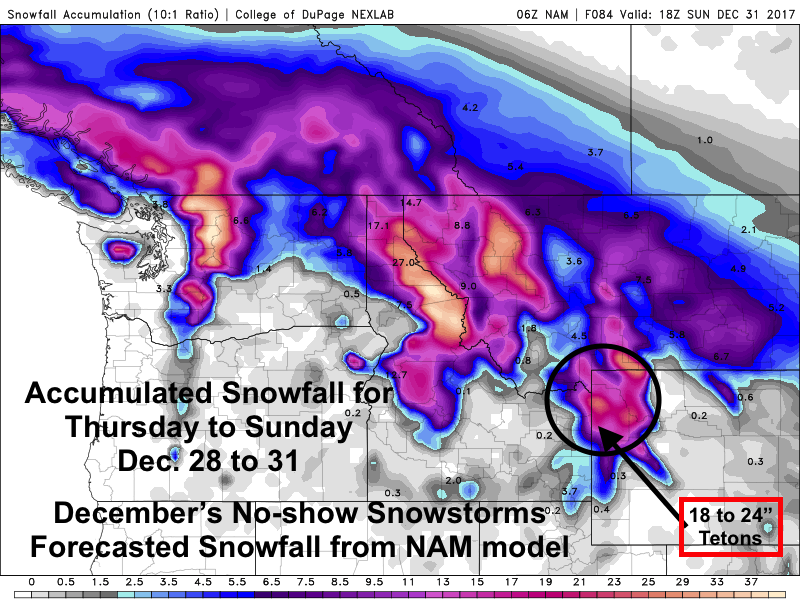 Another example above of one computer model’s snowfall forecast.

It seemed like we were lined up pretty good, with a strong Westerly flow aloft carrying Pacific moisture inland. But a few things were not happening.

Mainly, the jet stream, the colder air aloft, and the best mid-level moisture that was to be lifted over the mountains, did not get as far south as predicted by the models.

The other part of the equation that the models may have missed is that the atmosphere was not unstable enough, and the strong flow aloft actually caused more of a downslope or Chinook-like wind situation. Rather than lifting the moisture, it was being suppressed, or forced downward.

That would also explain what was responsible for the warming temps in the valley. They stayed in the upper 30’s to around 40-degrees, day & night from Thursday into Saturday.

Unfortunately, I discounted that lack of instability in the airmass, and missed the possibility of downslope winds. I should have paid closer attention to those factors.

Instead, I may have been guilty of one of the cardinal sins of a powder skiing meteorologist, “Thou Shall Not Wishcast”!

Now that I have seen this situation, I will not forget it, and hopefully I will not miss it the next time around. No matter what the computer models are predicting.That is, if I can stay in the saddle.