The ski season is officially over now. Ironically, the deepest snowpack of the season in the mountains often occurs after the resorts are closed. That has been the case at least for the past two winter seasons at Jackson Hole, and for the majority of winters here the last 10 to 15 years.

In this post, I will give you the grand totals for snowfall this winter and also give you an idea of how all that snow stacks-up, compared to years past.

At the Jackson Hole Mountain Resort the season ended on April 8th with around 500 inches of total snowfall. Depending on where you measure that snow.

The Raymer plot above the top of the Gondola at an elevation of 9,360 feet recorded the most snow between October 1st, 2017 and the morning of April 9th, 2018, with 502 inches. Last year that same location, for that same time period, had 521 inches.

What I found to be most interesting, was that this past decade has been the snowiest decade we have seen in the last 40-plus years. No other 10-year period has had more above average snowfall years than this past 10 years or so.

Starting with the 2005-06 winter season, 8 out of last 13 winters came in above the average for snowfall. And that average line has moved up a few ticks in the last decade, as well. 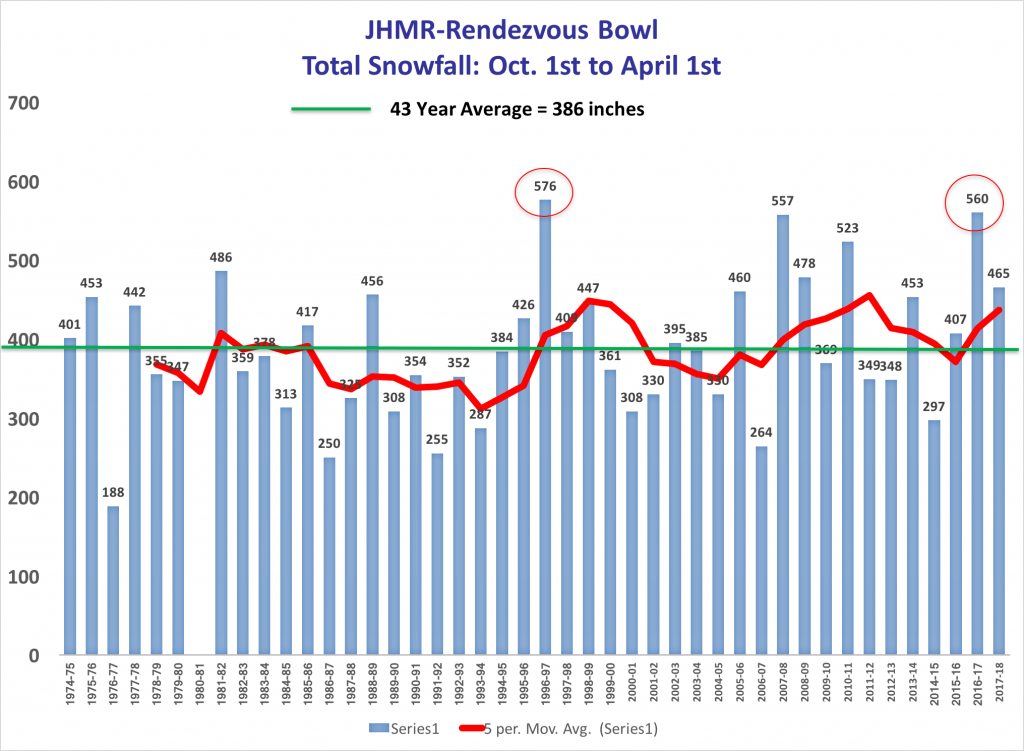 ( Data for above graph comes from Bridger-Teton National Forest database).

The other metric of interest is the maximum snow-depth at the end of the winter season. This gives an indication of how much snow is left up there in the mountains to melt, as we head into May and early June.

The settled snow-depth at the Rendezvous Bowl site on April 1st, 2018 stood at 131 inches. Last year on April 1st, the snow depth was 146 inches.

It continued snowing and accumulating this April, for several days after the resort closed. It looks like we reached our maximum snow-depth on the mountain this year on April 13th, when it peaked at 154 inches in Rendezvous Bowl. That will be the peak, barring any big snowstorms during these last few days of April.

Last year, the maximum snow-depth occurred on April 28th, 2017, with a record depth of 175 inches in Rendezvous Bowl. The deepest ever recorded at this location.

(The above graphs showing snowfall and snowdepths through the last two winter seasons at Rendezvous Bowl, JHMR. Graphs from Patrick Wright at Inversion Labs).

The next thing to monitor in the coming month or so will be the temperatures in the mountains. That will determine how quickly all that snow turns to water. Last year we lucked-out and the melt and runoff was relatively slow, sparing us from any major flooding in the valley.

Currently, as of April 20th, 2018, the snowpack at the Phillips Bench Snotel site on Teton Pass at 8,200 feet contained 33 inches of water, compared to 39 inches at the same time last year.

The Grand Targhee Snotel showed 55 inches of water in that snowpack, at an elevation of 9,260 feet this year on April 20th. That is actually more than last year at this same time, when there was 50 inches of water contained in the snowpack. Indicating that we have a little denser snowpack this year.

More info about snow and water content at the bottom of the Snow Reports Page on mountainweather.com, and historical data and graphs can be viewed on the Bridger-Teton Avalanche Center website.

Jim is the chief meteorologist at mountainweather.com and has been forecasting weather in Jackson Hole and the Teton Range for more than 25 years.