It has almost become a tradition in this column to talk about the coming winter’s weather, before summer is over. You might ask, why so early and who cares, it is only the last week of August?  Local skiers and snowboarders care, because in September the price of a season pass usually goes up.

Getting some inside scoop on what kind of winter we are going to have might affect whether or not you pull-the-trigger and buy the pass. If the long-range outlook portends a snowy winter ahead, that might provide the extra assurance that your money will be well spent.

I’m not really sure about the psychology involved there, but I do know that most snow enthusiasts want me to say, “We are going to have a huge winter!”

You’ll have to read on to get the real answer.

The Climate Prediction Center, or “CPC”, is a division of the National Weather Service, whose job is to look way ahead at weather patterns and trends, for the next 10 days, out to 12 months from now.

The CPC’s seasonal forecasts look at the expected departure from normal of temperature and precipitation across the United States, broken down into three-month periods. The forecast for the meteorological winter would include December, January, and February.

The CPC’s latest experimental Two-Class prediction for December 2018 through February 2019, issued on August 16th of this year, calls for between a 55 and 60 percent chance of warmer than normal temperatures over western Wyoming. Which, by the way, was similar to the prediction for last winter, 2017-18. Temperatures last winter did end up warmer than average.

For precipitation, the CPC gave western Wyoming equal chances for an above normal, below normal or normal winter in 2018-19. Not much assurance going on there, but not exactly bad news for snow enthusiasts.

Long-range forecasts are also predicting there will be a 60 to 70 percent chance of an El Nino developing this fall and winter. What exactly does that mean?

When temperatures are normal, it is called a “Neutral” condition. Since last winter and through this summer we have been stuck in “neutral”.

Typically, during Northern Hemisphere winters, an El Nino brings warm and dry conditions across the Pacific Northwest and Northern Rockies. At the same time, it brings wetter and cooler winters to California and the Southwest United States.

La Nina winters are supposed to bring cooler and wetter conditions to the Pacific Northwest and the northern Rockies. While, California and the Southwest usually remain drier and milder.

This year’s El Nino forecast does line up pretty well with the precipitation pattern shown in the CPC forecast maps. Unfortunately, that may not be very good assurance of a big snow year for us. We’ll have to wait and see how strong that El Nino becomes, and how it affects weather patterns across the northern Pacific.

The 2019 Old Farmer’s Almanac doesn’t officially come out until September 4th, 2018. However, I got a peak at their map that depicts the expected winter’s weather across the United States. The map shows most of the Pacific Northwest and northern Rockies under, “mild, snowy” conditions for this coming winter.

Key word there, of course, is “snowy”.

If you like the almanac’s forecast, then take-that-to-the-bank, and make sure you have enough money in your account to buy that season pass! 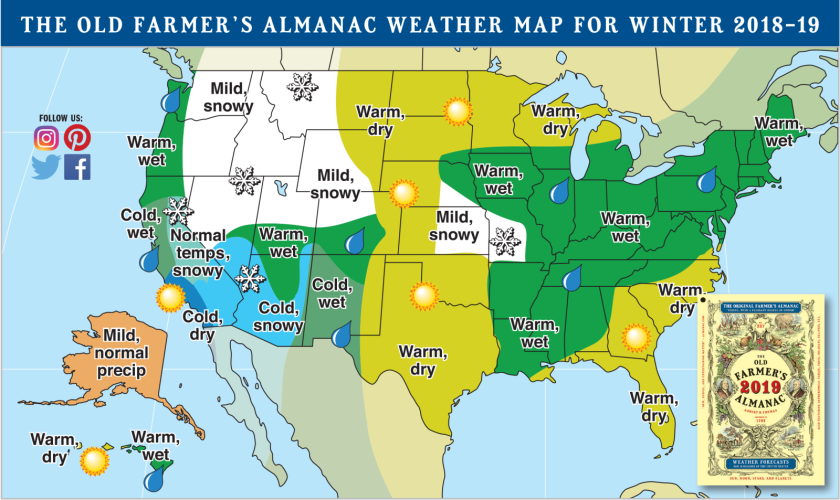 Jim is the chief meteorologist at mountainweather.com and has forecasted weather in Jackson Hole and the Teton Range for the past 25 years.