Some Snow for the Tetons

Total snow accumulations predicted for today (Friday) thru Saturday morning for the Teton mountains are between 6 and 10 inches. See map below from the NAM model run by NexLab.  Click on the next map to see a loop of accumulating snow from 8 am today thru Noon Saturday, from CAIC WRF model (Colorado Avalanche Information Center).

Just enough moisture for clouds & some light snow showers hanging around the mountains Sunday into Monday. Do expect some brief breaks in the clouds with this very weak upper level flow. (Keep scrolling down for more Regional & National info)

Click on map below for a loop of snow accumulation thru Saturday at Noon.
This model shows the Teton Range accumulating 10 inches+ at the higher elevations, including what already fell prior to 8 am Friday. 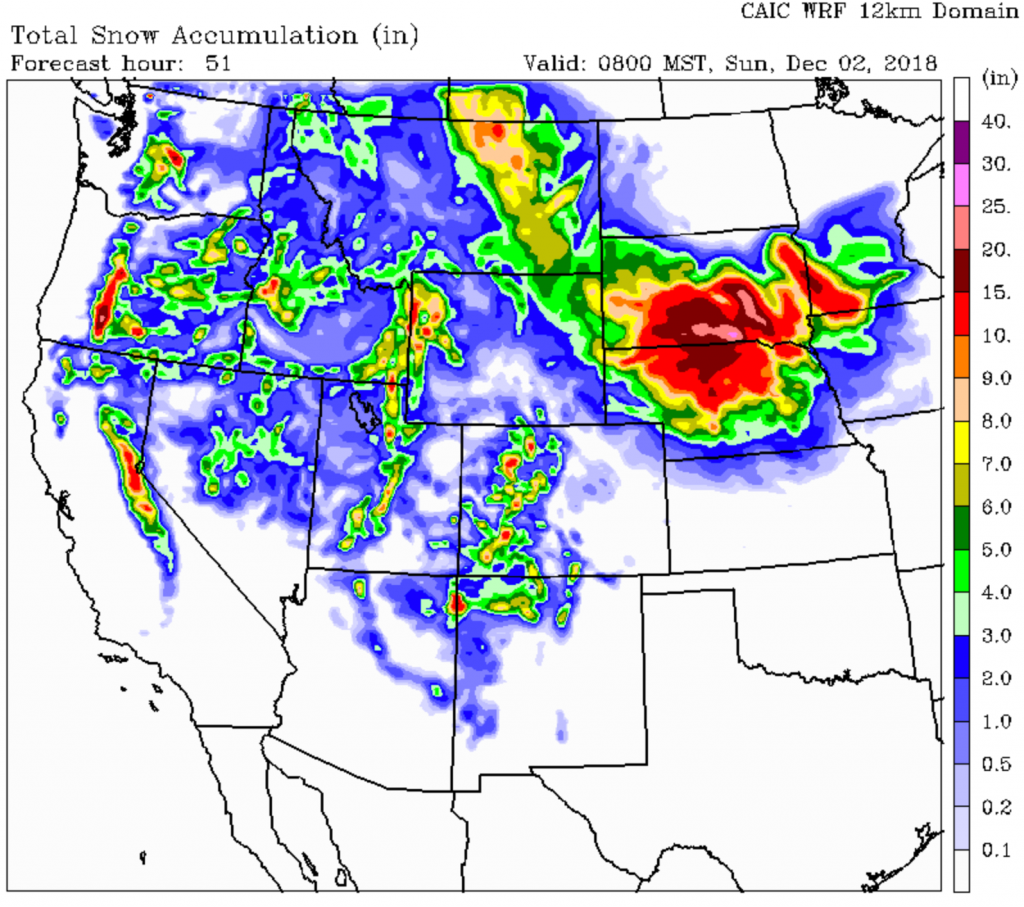 Look at the Bigger Picture

Slow moving weather systems across the United States will be the rule through the first weekend of December. Along with a jet stream that remains over the southern portion of the U.S.

Map below shows total snow accumulations from Friday morning Nov. 30th through Monday morning December 3rd, 2018, across the entire Continental U.S.
Biggest accumulations over the southern Cascades around Crater Lake, and also Southwestern Colorado’s mountains around Telluride and Wolf Creek Pass.
In Nebraska too, but the skiing there is kinda flat!

Below are the forecast weather maps for Saturday, Sunday & Monday morning. These maps are for the 700mb level or around 10,000-ft. in the atmosphere.
Positions of High & Low pressure & the Jet Stream are plotted on the maps.
The previous 24-hours of precipitation are also shown.
(+ marks the Jackson Hole Mountain Resort)

Faint gray lines on these maps show the pressure pattern at this level. Where the lines are close together it is windier. Farther apart, it is less windy.
Here is the precip scale in inches of water to use for these maps:

Jet stream dipping further south and pulling further eastward by Monday.
Winds aloft near ridgetop level are about as light as they get for Sunday & Monday over the entire western U.S. Precipitation also tapers off in most areas.