From fishing, boating, hiking and climbing, to softball, soccer and golf, summertime activities can frequently expose us to the dangers of lightning.

Knowing the dangers and what to do if caught outdoors in a thunderstorm, may help you avoid being zapped this summer. So, as I do every year, I’ll review some lightning safety tips for you in this week’s column.

The temperature of a lightning bolt, during that split second, can reach 54,000-degrees Fahrenheit, which is about five times hotter than the temperature on the sun.

The electrical energy and intense heat from lightning can hurt you in a number of different ways:

1) Direct Strike. This rarely happens, however, if you were unlucky enough to take a direct hit, it would be game-over, right then and there.

2) Conduction. Electrical energy travels through all metal objects, but also through graphite, carbon-fiber and water. During electrical storms avoid direct contact with wire or chain-link fences, your fishing pole, hiking poles, bicycle or boat. Think of sticking your finger in a light socket, multiplied by about one-million times.

3) Side-flash. The heat & electrical current that emanates outward through the air from a nearby lightning strike can cause cardiac arrest, concussive injuries, severe burns and/or nerve damage.

4) Ground Currents. When lightning strikes the ground, the electrical current is carried outward, radially, in all directions through the ground. If that current reaches you, where you are standing or sitting, it can travel through your body. Cardiac arrest, burns and nerve damage are all possible from ground current. 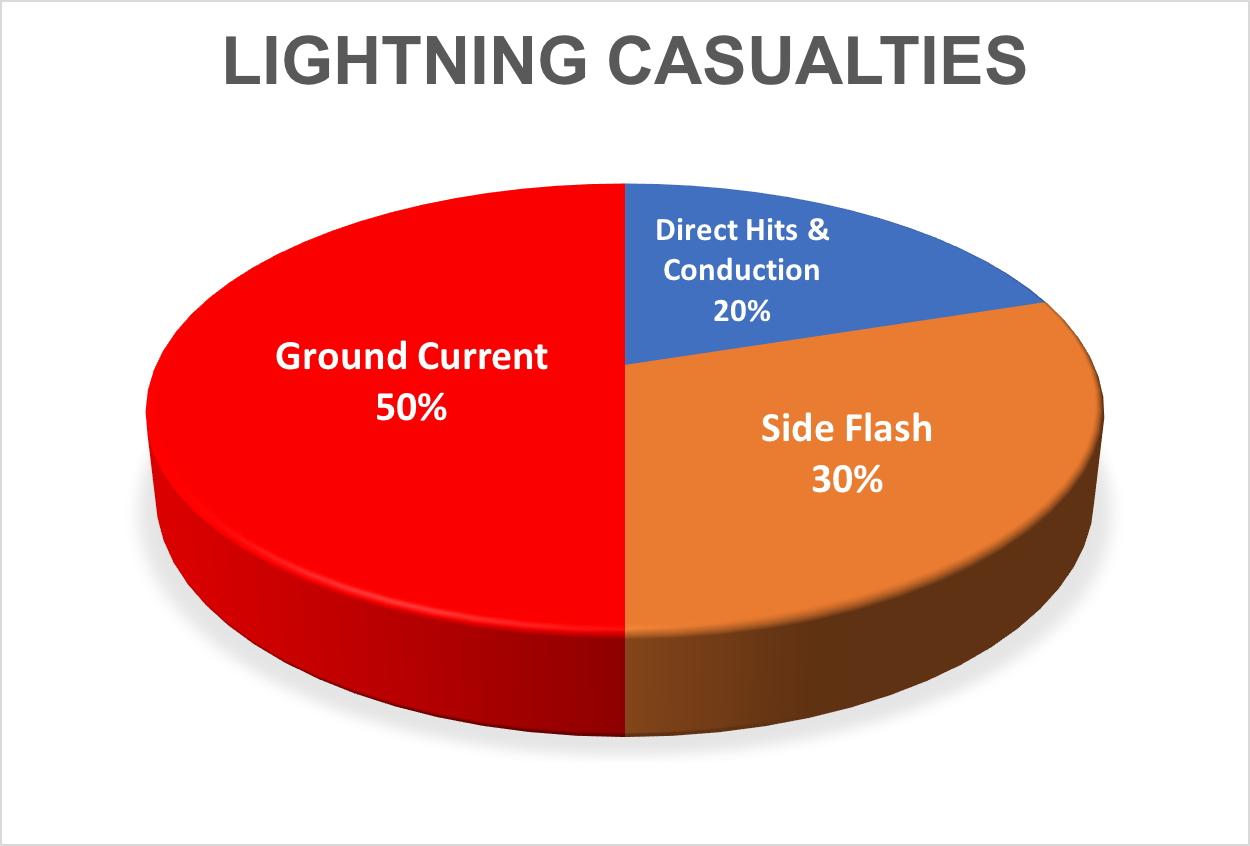 Direct hits and conduction account for about 20-percent of all lightning casualties. Side-flash accounts for about 30-percent. Ground currents are the most common way people are injured or killed by lightning, accounting for 50-percent of the casualties.

The safest place to be during a thunderstorm is in a building or a car. A “building” means a 4-walled structure with a foundation and grounded electrical and plumbing. A picnic shelter or large tent may keep you out of the rain, but your lightning exposure is the same as standing out in the open.

It is not the tires on your car that insulate you, it is actually the metal frame and body of the car that dissipate the electrical energy around you. A motorcycle or bicycle do not offer this same “halo” of protection.

If there is not a building or car to retreat to, get to lower ground. Get off ridgetops, off the water, if you can, get to a grove of similar height trees to wait it out. Do not run for the biggest, lone tree to get out of the rain.

By the way, even other people can conduct electricity, like when standing in a crowd.

Lightning that strikes nearby will generate intense heat and electricity, possibly resulting in side-flash injuries.

Think of a lightning bolt like a hand grenade. The standard U.S. Army grenade has a kill radius of around 25 feet and a casualty (injury) radius of roughly 50-feet. A group of people, standing close together, will result in more casualties.

When lightning is present, don’t huddle together. Instead, spread out 25 to 50 feet apart. That way, if someone does go down after the explosion, others in the group can give aid.

While ground current kills or injures the most people every year, it is perhaps the easiest to protect ourselves from. If you find yourself outside with no good place to hide when lightning is striking nearby, then just stand still with both feet together.

The current that travels through the ground will take the path of least resistance and can go up one leg, through your body and exit out the other leg. Keeping your feet together at all times can prevent that current from getting to your vital organs.

If you can’t, “Get indoors when thunder roars”, as the National Weather Service slogan says, then:

1) Get to the best un-exposed location you can.
2) Get away from any metal objects you are carrying.
3) Spread your group at least 25 feet apart.
4) Stand with both feet together, and wait it out.

My hope is, by following this advice, you will have a safe and un-shocking summer.

This post appeared originally in the Jackson Hole News & Guide