You have probably heard the old saying that Jackson Hole gets nine months of winter and three months of bad skiing (substitute: boarding or sledding here). Some years, that is very true, as winter weather can start in September and last until June.

Last month on this Blog, I reviewed the “meteorological winter” season, which includes the months of December, January and February. In this post, I will add the month of March to the mix, to tally up how much snowfall there was during the traditional ski season ( December 1st to April 1st) .

Snowy March Piles it On

A big storm mid-month dropped a record daily snowfall amount in town, with 12 inches in 24-hours on March 14th. Jackson Hole Mountain Resort also broke a record for that same date in March, with 23 inches of snow in 24-hours.

Snowfall in town for the month of March tallied up 24 inches, more than double March’s average snowfall of 11 inches. By the way, that was only 2.5 inches shy of the record snowfall in March of 26.5 inches set back in 1985.

Mountain snowfall in March was also above the norm for March, with 86 inches of snow recorded at the Rendezvous Bowl weather station at the Jackson Hole Mountain Resort (Elevation 9,580-feet). Almost 20 inches more than the average snowfall for March of 67 inches.

Adding up snowfall numbers from December 1st, 2019 through March 31st, 2020 for the Town of Jackson Climate Station: 89 inches of snowfall was recorded during that four-month period. That is 28 inches more than the historic average snowfall for December through March, which is 61 inches.

If you add October & November 2019’s snowfall amounts to that total (15 inches), then our six-months of “winter season” snowfall total goes up to 104 inches. That’s well above the historic average for those six months in town, of 71.5 inches.

The total snowfall for the traditional “ski season”, December 1st to April 1st, at the Rendezvous Bowl weather station at Jackson Hole Mountain Resort was 417 inches this winter.

That is over 100 inches more snow than the long-term average for that four-month period, at that location. Average snowfall for December through March, at the Rendezvous Bowl site is 308 inches.

January took the biggest prize this winter with a record-breaking 169 inches of snowfall for the month at Rendezvous Bowl. That was the snowiest January ever recorded at this weather station.

The grand total for snowfall measured this “winter season”, from October 1st, 2019 to April 1st, 2020, at Rendezvous Bowl, was 510 inches. That is 119 inches (almost 10 feet) more snow than the long-term average seasonal snowfall up there, which is 391 inches.

That exceeded last winter’s total snowfall of 496 inches but fell short of the total from the winter of 2016-17, of 560 inches.

As a matter of fact, this winter was one of only five winters on record that have exceeded the 500-inch mark at JHMR. Three out of those five have occurred in the last 10 years. 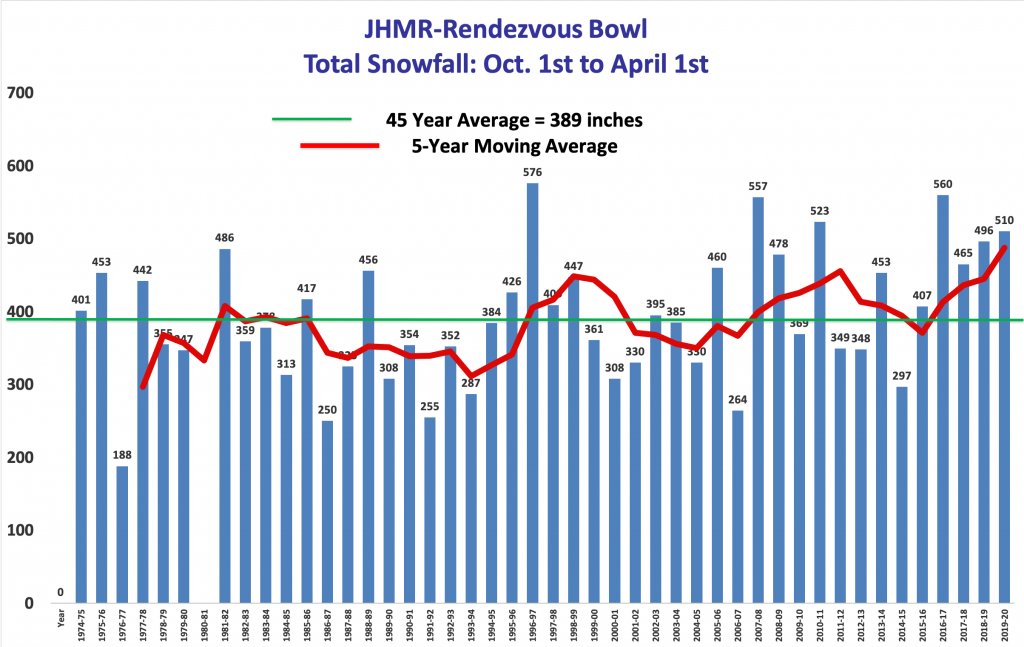 I don’t want to jinx it, but it would seem that we are a roll with above average snowfall winters here in Jackson Hole. (See Graph).