This is a compilation of all of the weather stats for the Town of Jackson, WY for the year 2020, the stats that become part of the story of our local climate. Data presented comes from the from the Jackson Climate Station, located on the north end of town. As you will see, 2020 went down as another cold and snowy year here in Jackson.

Following this summary is a look back at the most significant weather events that occurred in 2020, what was unusual or outside what we consider “normal” weather.

The hottest temperature recorded at the Jackson Climate Station in 2020 was 88-degrees on August 17th. There were no days that officially reached 90-degrees in town.

The average low temperature for the entire year in 2020 was 23-degrees. That is precisely what the long-term average annual low temperature is for Jackson. In that respect, 2020 was totally normal.

The annual mean temperature for Jackson in 2020 was 37.5-degrees. That tied for the 8th coldest year on record

Keep in mind, to be in the competition for the coldest or warmest year ever, you need 12 months of complete weather data. Out of the last 97 years, dating back to 1923, there were 36 years with too many missing days or months of data to be able to calculate an accurate annual mean temperature. The year 2019 was the coldest out of the 61 years with complete data.

For trivia’s sake, the hottest annual mean temperature in Jackson’s climate record was 47.5 degrees, way back in 1933.

After a recent run of four years in a row with above normal annual precipitation, from 2016 to 2019, the Town of Jackson experienced a drier than normal year in 2020, but not by much. Total precipitation in Jackson in 2020 was 15.22 inches, compared to a long-term average of 15.83 inches.

Total snowfall in the year 2020 was a different story, we are presently on a five-year run with above average annual snowfall, and 2020 was the biggest of them all.

For the calendar year 2020, which actually accounts for parts of two different winter seasons, Jackson received 121 inches of snowfall. In 2019 we had over 111 inches. The average annual snowfall in the Town of Jackson is 77 inches.

I could only find three other years when the annual snowfall was greater than 121 inches in Jackson, the biggest of those years was in 1967, with 155 inches. The other two were in 1971 with 130 inches and 1973 with 123 inches. Again, these are among years that have complete records.

The weather in Jackson, WY for 2020 could be summed up as simply as this: it was colder and much snowier than normal, along with close to normal precipitation. 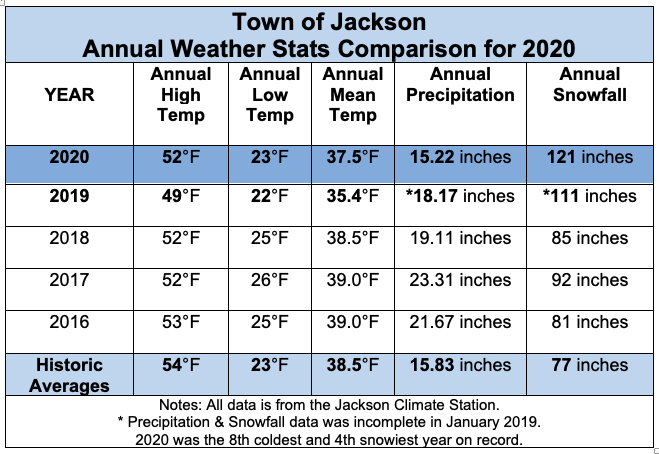 Everything was unusual in 2020, even the Weather

The pandemic created unusual circumstances that affected many aspects of our lives in 2020, the one thing it did not affect was the weather. Weather can be unusual all by itself.

Here, I will revisit Jackson’s weather from 2020 and focus on the more unusual events we had, in this most unusual year, season by season.

January 2020 started out with a bang, when 32 inches of snow fell in the first two weeks of the year, in the Town of Jackson. That was big, considering the average snowfall for the month of January is 19 inches.

Rendezvous Bowl at the Jackson Hole Mountain Resort totaled up the most snowfall ever recorded in the first half of January. A total of 121 inches of snow was measured there between January 1st and January 15th, 2020. That’s 10 feet of fresh powder in two weeks.

The average snowfall for the month of January in Rendezvous Bowl is 86 inches. January 2020’s total snowfall ended up being nearly twice that, with 169 inches, establishing a new January snowfall record. The old record was 150 inches, set in January 1998. January 2020 was also the third snowiest month ever recorded at JHMR.

That same day, the mountains received 23 inches of snow in 24 hours. That’s also the day the ski areas closed for the season.

As we all hunkered down in April, temperatures remained colder than normal. Jackson broke another record with a high temperature of only 28-degrees on April 13th, 2020. The low temperature that day was an unusually chilly 6-degrees. It was also snowier than normal during April 2020, in town and the mountains.

At the Rendezvous Bowl Weather Station (elevation 9,580-feet), at the Jackson Hole Mountain Resort, 74 inches of snowfall was recorded in the month of April 2020. Average snowfall there in April is listed as 33 inches.

We started to dry out in May 2020. Precipitation this past May was only about one-third of the long-term average, 0.63 inches vs. 1.80 inches. June had more showers, but still checked in with just below average precipitation, 1.55 inches vs. 1.63 inches.

Temperatures were a bit at odds during the Summer of 2020, with cooler than average daily high temperatures, but slightly warmer than average overnight low temperatures. As a matter of fact, we went 91 days in a row without dropping below the freezing mark, between June 1st and August 30th. That is exceptional for Jackson.

Over Labor Day Weekend the weather changed from warm and dry, with a high of 87-degrees September 5th, to cold and snowy, with a high of only 43-degrees on September 8th, 2020. That established a new record cold high temperature for that date.

October 2020 also began relatively warm, then turned brutally cold during the final week of the month. On the morning of October 26th, 2020, the low temperature at the Jackson Climate Station dropped to 9-degrees below zero.

That established a new record cold temperature for the month of October. The old low temperature record for October, of minus 6-degrees, was from one year earlier, on October 30th, 2019.

October 26th, 2020 also established a new record cold high temperature for the month of October, of only 18-degrees. This was the first time in Jackson’s recorded weather history that a high temperature in October was in the teens.

November 2020 had its ups and downs temperature-wise, but as with October 2020, it checked in colder than average. November was also snowier than average in town.

So far, December 2020 looks like it will finish up slightly cooler than normal overall, even with those few days of unusually warm temperatures around the Solstice.

I tried to hit as many of this past year’s weather highlights as I could, although there are probably more that you might recall. For now, as most of us would probably like to do, let’s put 2020 in our rear-view mirror. Hopefully, 2021 will be a little less unusual for us, weatherwise and otherwise.