The first hints of fall weather have begun to arrive in the Rockies, and while the Autumnal Equinox is still a week away, I thought it was time to take a look at what might be in store for winter season, 2021-22. I live in Jackson Hole, WY where the zest for snow never seems to end, no matter what the season.

In this post, I’ll look at various outlooks for Winter 2021-22. I’ve included the Old Farmer’s Almanac and the Farmer’s Almanac predictions; both out in print this week. I’ll also break down the long-range outlook for this winter from NOAA’s Climate Prediction Center.

The Old Farmer’s Almanac for 2022 is the 230th edition of this iconic weather tool. For the first hundred years or so, this familiar yellow jacketed paperback book was essentially the only source for any kind of long-range weather outlooks. The almanac is also stuffed with all sorts of other interesting tidbits of information about the sun, the moon, planets, gardening, etc.

This coming year’s edition has predicted a Cold and Dry winter for the Jackson Hole area. That forecast is also valid for the entire Intermountain Region, including Idaho, Utah, Western Montana, Western Wyoming, and Western Colorado.Western Washington and Oregon, along with all of California, are forecast to have a Mild and Dry winter in 2022. 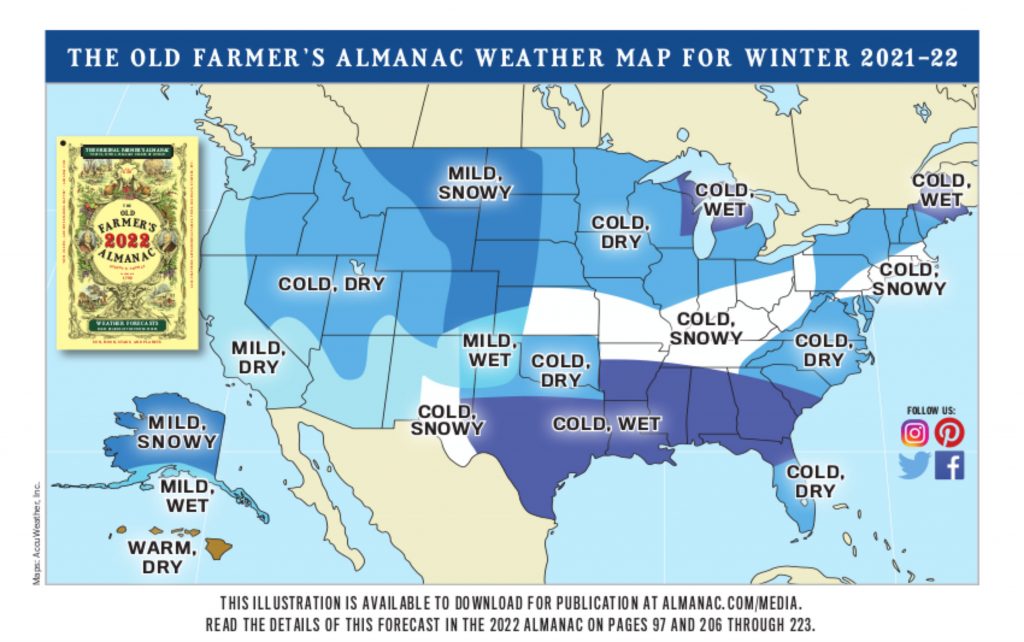 Not quite as old as the other almanac, the Farmer’s Almanac (the orange covered one) has been around since 1818 and for 200-plus years has been the only other competitor in that market for old-school type forecasts.

Their outlook this year, for our neck of the woods, is rather cryptic in its message. For all of Montana, Wyoming and Colorado the forecast is, and I quote, “Numb’s the Word, Just Shovelin’ Along”. I am sure that most skiers and snowboarders would interpret that to mean, “Cold and Snowy”. 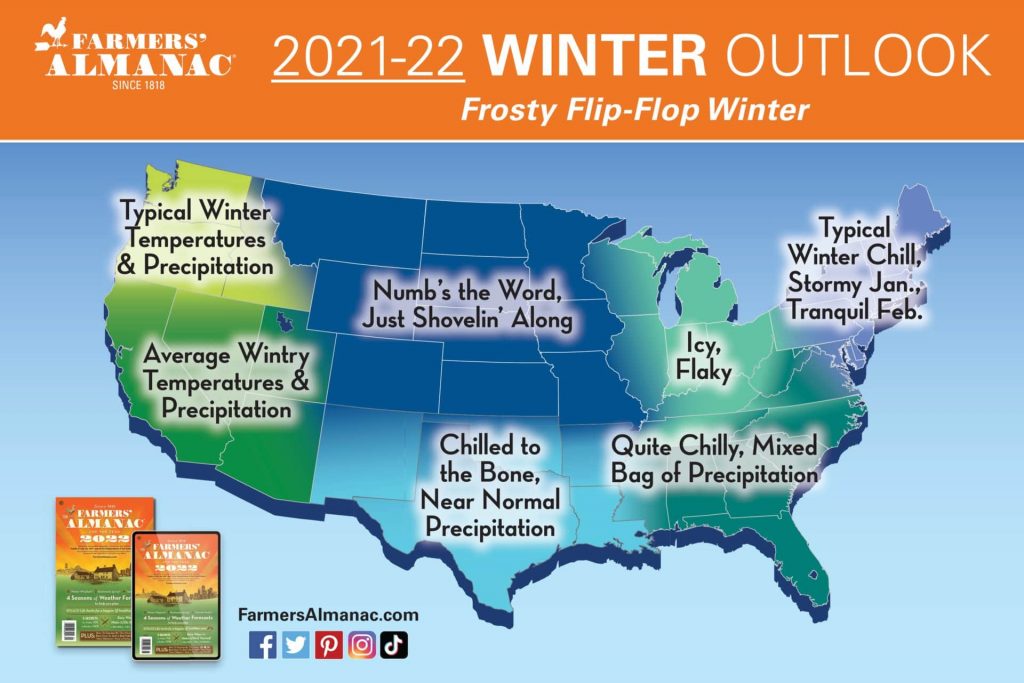 The latest forecast made in mid-August and issued by the Climate Prediction Center looking ahead to the December through February time-frame, shows that in Western Wyoming we can expect “Equal Chances” of being above or below average for both precipitation and temperatures.  That’s not exactly solid intel for picturing what kind of winter we’ll have.

One last thing to consider is the state of the ENSO (El Nino Southern Oscillation). Right now, NOAA is saying we are under a “La Nina Watch”. Their most current forecast reads like this: “The central tropical Pacific Ocean is in a neutral climate state, but the odds of at least a weak La Niña emerging this fall have risen to 70-80 percent.”

That is generally good news to me, as the storm track favors the Northern tier of the U.S. in a La Niña, and Jackson Hole usually has better than average snowfall during La Nina winters. How strong that La Niña becomes is also critical, and that remains to be seen over the next several months.

After 40 years here, I have also concluded that even a bad winter in Jackson Hole is better than a good winter anywhere else.