We are now past the Autumnal Equinox and for the remainder of the fall season the days will be getting shorter and the sun a little lower in the sky as we roll closer to the winter season. That should come as no surprise, as this happens every year around this time.

The other thing that happens every year around this time is people start asking me, “What kind of winter are we going to have?” The more diehard skiers actually start asking before the end of August. So, every year, I feel obligated to take a look at all of the various outlooks for the coming winter season.

This year I’ll include both the Farmer’s Almanac and the Old Farmer’s Almanac takes on what to expect of this coming winter’s weather, along with the long-range outlook from NOAA’s Climate Prediction Center and a few other less conventional forecast sources.

The Old Farmer’s Almanac is the yellow-jacketed paperback that has been around for over 230 years and is a treasure trove of all kinds of weather, astronomy, farming and gardening trivia. It is the consummate bathroom book.

This year’s edition just came out and what their weather map shows for western Wyoming and the Jackson Hole area for this winter is, “Mild and Wet” conditions. I suppose you could interpret that to mean above normal snowfall, but not too cold. I know the diehard skiers will read it that way. 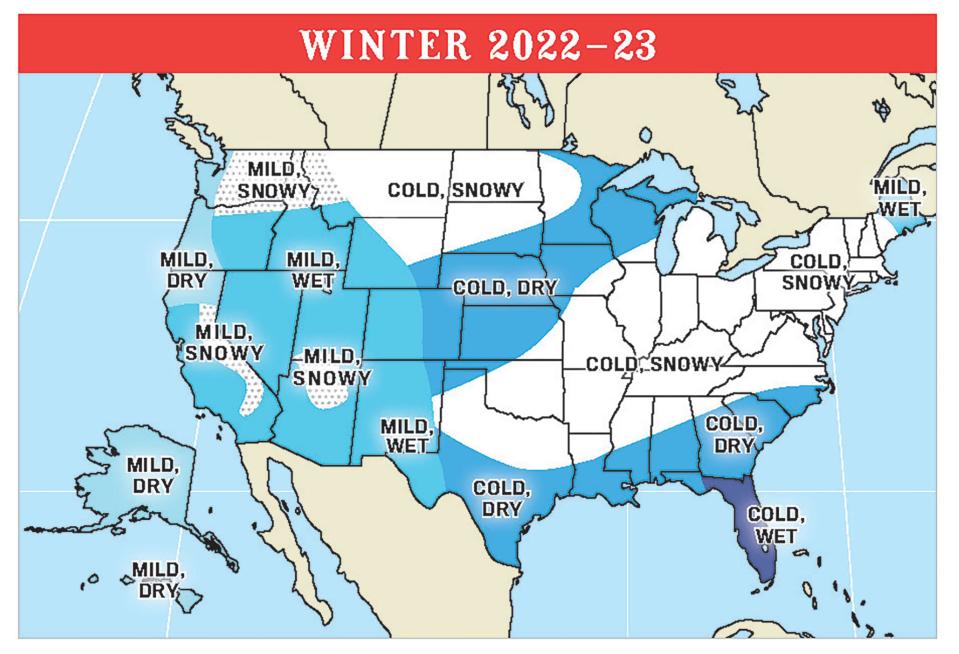 The Farmer’s Almanac is the other almanac, the orange covered one, it’s not quite as old as its competitor, but is still chock-full of all kinds of weird folksy information and would also compliment that library within reach of your toilet.

Their outlooks are usually written with a more cryptic flair, leaving the reader to wonder what exactly it means? This year their weather map shows all of Wyoming underneath an area that says, “Hibernation Zone. Glacial, Snow-filled”. Wow! Glacial and snow-filled can only mean one thing, tons of powder skiing for us this winter. 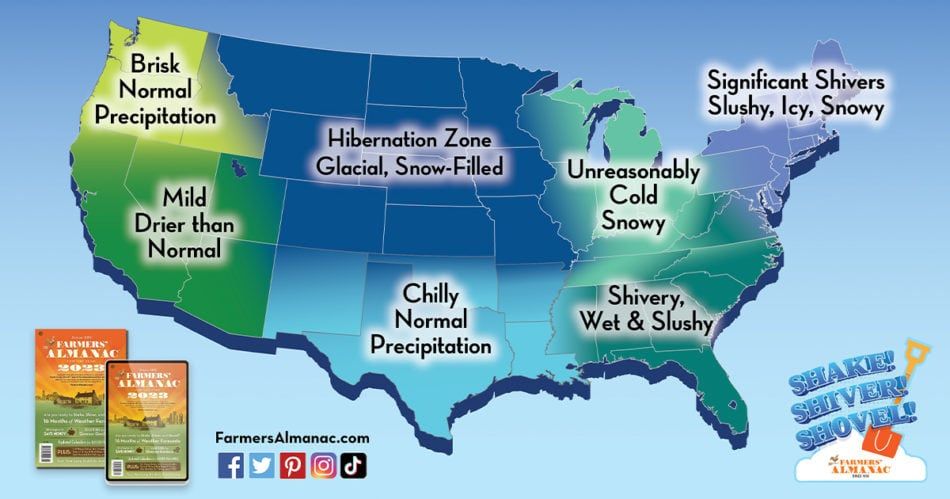 The latest forecast maps from NOAA’s Climate Prediction Center, issued in mid-September, are not showing anything out of the ordinary over this part of Wyoming. For December, January and February, they are predicting colder than normal temperatures to the north of us, from Washington State to Minnesota, and warmer than normal temperatures over the Southwestern United States. Wyoming sits in-between and essentially ends up with a 50/50 chance of being above or below normal for temperatures this winter.

NOAA’s outlook also predicts above normal precipitation over northern Idaho and western Montana, with Northwestern Wyoming right along the margin of that above normal zone. Any diehard skier would certainly call that close enough to say we’re likely going to have a snowier than normal winter this year.

As far as the El Nino-La Nina situation is concerned, NOAA is predicting that the current La Nina conditions that we have been in since last winter will continue this fall, with a little less confidence that it will continue through the entire winter.

That is usually good news for us, as the storm track favors the Northern tier of the U.S. in a La Niña. However, every La Nina year is a little different, some have been huge for snowfall here in Jackson Hole and others, like last winter, have ended up more mediocre. Although, we did have a big December and a big April for snowfall last winter, but very little in the middle.

There are a few other indicators that I am going to consider this year. One is the wooly worms. It is said that when they are all black, with no stripes, it portends a long winter. Most of the wooly worms I have seen out on the trails this past month were all very black.

The third indicator is an abundant crop of pinecones. Where I live in the trees on Snow King, the local squirrels have been very busy tossing down copious amounts of pinecones on my roof and my yard for the last few weeks. They must know something I don’t. I figure if they are vigorously storing up that many nuts, they must be expecting a huge winter. Call me nuts, but I’m banking on the squirrels and raspberries to predict the weather for this coming winter.

Jim is the chief meteorologist at mountainweather.com and has provided a weather forecast for Jackson Hole and the Teton Range for the over 30 years