According to the Glossary of Weather and Climate, Indian Summer is defined as:
A time interval in mid or late autumn, of unseasonably warm weather, generally clear skies, sunny but hazy days, and cool nights. At least one killing frost and preferably a substantial period of normally cool weather must precede this warm spell in order for it to be considered a true “Indian Summer”.  It does not occur every year; and in some years two or three Indian Summers may occur.

The weather in Jackson Hole and across much of the West and Rockies during the first 3 weeks of October 2022,  fit that bill, for the most part. At least most everyone I’ve spoken with has referred to it as “Indian Summer” weather. Which has been welcomed by most and loathed by a few. There are those among us who might prefer to see Mother Nature bring on the snow by mid-October. I am not one of them.

This year’s spectacular October weather was courtesy of a big, warm ridge of high-pressure that developed over the western United States. That ridge has remained sandwiched in-between two large and cold troughs of low-pressure.

One of those low-pressure centers has been parked over the eastern United States causing colder than normal temperatures, cloudy skies, and rain. Some areas around the Great Lakes have also seen snow. The other low-pressure area is to the west of us, in the Pacific. That low has been circulating around out there bringing rain and snow to south-central and southeastern Alaska. 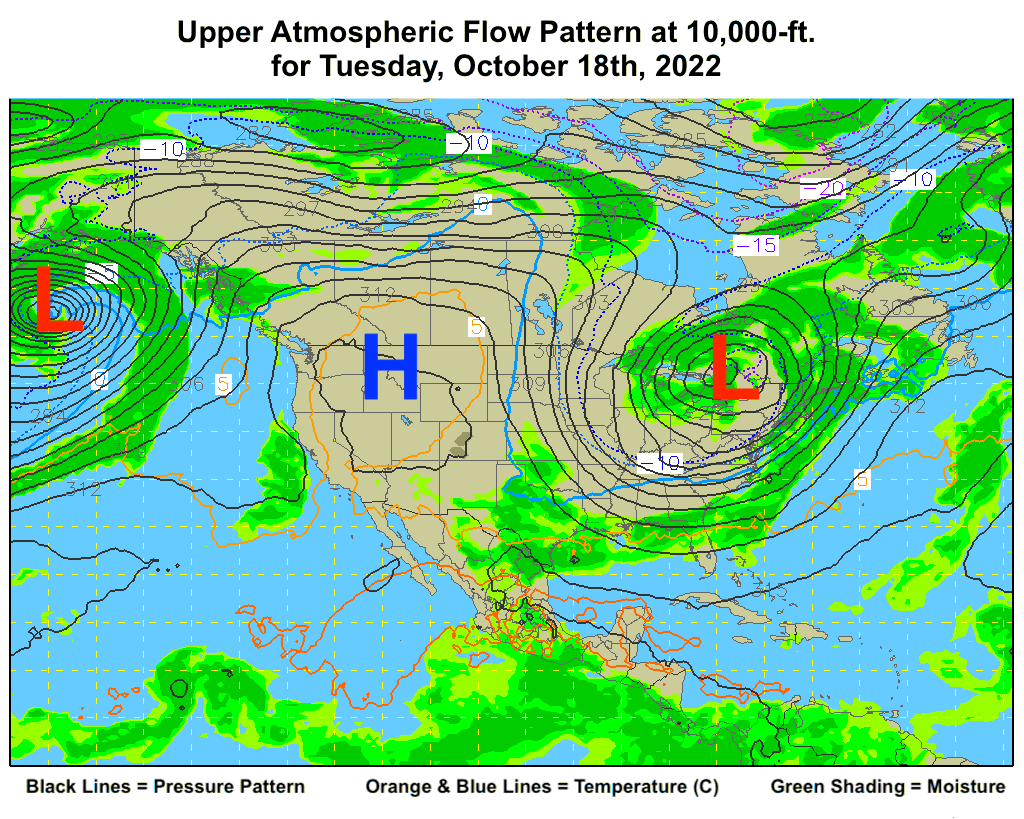 This is a classic blocking pattern in the atmosphere, one that occurs periodically. It is nothing unusual and it looks like it will be breaking down very soon.

I have always maintained that we have very short memories when it comes to the weather. For instance, could you tell me what last October was like in Jackson, WY? Or perhaps the last three Octobers? Were they warm and dry, cold and wet?

To be honest, if I don’t go back and look it up, I can’t always instantly recall what the weather was doing here from one year to the next. Unless there was something I did that was memorable, like backpacking in the Wind River Range at 11,000-feet in mid-October, about 10 years ago? Or skiing on Teton Pass by Halloween, in whatever year that was? See what I mean.

To refresh our memories, here is a rundown of what the weather was like in Jackson the last few Octobers, as they were all quite different.

The second week of October 2021, temperatures cooled, and we got some rain. At the end of that second week, Jackson had several days with high temperatures only in the 30’s and 40’s, with a little bit of snow in town, near a half-inch, on October 13th, 2021.

Overnight low temperatures in the first half of October 2021 got down into the teens several times. This October, the coldest morning was 21 degrees on October 10th, 2022.

Two years ago, October 2020 also started out warm and dry, much warmer than this October, with high temperatures over 70 degrees in town every day for the first 10 days of the month! The warmest day was October 7th, 2020, with a high temperature of 75 degrees in town. Another October that had a great Indian Summer.

Three years ago, October 2019 started out cooler than normal, with our first measurable snow in town on October 1st. High temperatures fluctuated wildly throughout the first two weeks or so of the month, ranging from 30 degrees to 66 degrees in town. Overnight low temperatures had already dipped into the single digits by October 11th, 2019, with a low of 8 degrees.

October 2019 established new record low temperatures for the month of October, with a high temperature of 20 degrees and a low of minus 6 degrees on October 29th, 2019. Both of those monthly records were broken the following year, in October 2020, as noted above.

Overall, October 2019 remains the coldest October ever recorded in Jackson, for both average high and average low temperatures. No Indian Summer here that October.

The Ups and Downs

The weather pattern this October kept high pressure parked over us and allowed a long stretch of Indian Summer weather. Personally, I’ve enjoyed it, winter is already long enough, without adding autumn to that schedule.

NOTE: To learn more about the origins and history of the term Indian Summer, check  out this article published on the Old Farmer’s Almanac website. Or this one from the Farmers’ Almanac.

Jim is the chief meteorologist at mountainweather.com and has provided a weather forecast for Jackson Hole and the Teton Range for the over 30 years