For the past two weeks, during part of my “Spring Break”, I was involved with teaching avalanche and weather forecasting courses to military meteorologists here in Jackson Hole. I spent last week with the US Air Force’s 10thCombat Weather Squadron, based out of Hurlburt Field in Florida. The week before, I was with the US Navy’s Special Warfare Support Activity Group-2 out of Little Creek in Virginia Beach, VA.
Prior to these courses, I had the opportunity this past Fall to work with both of these groups teaching a Mountain Weather Forecasting Course at their respective bases, and these avalanche courses became a natural progression towards improving their winter weather forecasting skills.
The two courses conducted here in Jackson this April were a cooperative effort between the American Avalanche Institute and MountainWeather™, and I was assisted by one of AAI’s lead avalanche instructors, John Fitzgerald.
A lot of work went into coordinating and conducting these specialized courses, but in the end, John and I both came away with a healthy respect for the jobs that both of these groups do and were honored to have these teams here working with us.
Below is a recap of these courses, some photos, and little bit about the work these dedicate groups do for our country.

The 10th CWS is part of the Special Operations Weather Team (SOWT), and they are among some of the most highly trained personnel in the US Miitary. It’s hard for me to imagine “fighting weathermen”, but that is exactly what they are. Capable of forecasting the weather, installing weather stations in remote (and often hostile) locations, sometimes parachuting into those locations, and if necessary, shooting their way out.  That’s a pretty “bad-ass” bunch of meteorologists!
John and I did manage to stay just ahead of this fit group on our ascents of various mountains during the field portions of the avalanche class, and we felt that the mountain-travel training they received was almost as valuable as the snow and avalanche knowledge we imparted. Perhaps on their next deployment into Afghanistan’s Hindu Kush mountains they will remember how pleasant (and free of gunfire!) the mountains around Jackson Hole were. 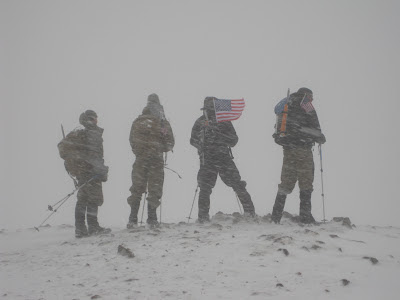 One of the things that impressed us the most about the boys from the 10th, besides their dedication to the tasks we gave them during the course and their ability to add one more complex skill to their already impressive set, was their patriotism. Everywhere we went, no matter what the weather, no matter how long the climb, the universal sign of Freedom was unfurled, the American flag.  (Note: They even brought an eagle head mask for the photo! See man in the center of pic with wings spread.)
The guys from the 10th also shared with us some photos that were taken near Salang Pass in the Hindu Kush, a known avalanche prone area that is a major thorofare through those mountains for both local and military transport. Salang is like a really large scale Teton Pass!
Salang Pass was the site of devastating avalanche cycle back in February 2010 that trapped over 2,000 travellers and killed 172 people. During that same storm in 2010 there was a second avalanche accident at the Indian Army’s High Altitude Warfare School near the Gulmarg Ski Resort in NW India’s Kashmir , involving over 50 troops and killing 17 men during a training session.

Theses incidents highlight the need for members of the 10th CWS to have good avalanche-weather forecasting skills. Which could have the potential to save untold lives in the future.

The most striking photo I saw from Salang was of the group erecting a weather station at Salang Pass last Fall…..it reminded me of the that famous photo of the Marines planting the flag at Iwo Jima!

NSWSA-2 personnel provide support and logistics to the Navy’s Seal Team-2 at Little Creek. The part of their group that came to Jackson is responsible for all the weather forecasting for these Naval special operations. This group also gets deployed to forward bases and can find themselves in a position of forecasting winter weather and/or the potential for avalanches in the surrounding mountainous terrain.
The main focus of this course was to provide this group with a better understanding of forecasting weather in mountainous terrain and applying that to changing snowpack conditions and changing avalanche hazard. Our goal was to give these forecasters the knowledge necessary to help warn and keep their troops on the ground out of harms way of avalanches.
For the four forecasters that came to Jackson, this was their first experience digging snowpits and actually analyzing the snow layers and seeing first-hand how the snowpack, terrain, and weather all interact with each other. This extremely sharp group absorbed the complex science of snow very quickly, and I expect they will be able to make sound assessments of the avalanche danger if called upon to do so for an operation.
The weather in Jackson this April also provided this group with a variety of conditions to forecast for, most predominantly warming temps and spring wet slides.
Coincidentally, a springtime avalanche cycle had just occurred the week prior over in the eastern part of the Karakoram Mountains, along the India-Pakistan border. (The Hindu-Kush lies in the western end of the Karakoram). One very large avalanche near the Siachen Glacier buried an entire Pakistani Army Camp, 140 people, and so far no one has been found alive.
This incident, along with two other deadly avalanche cycles this winter during the month of March 2012 that buried several villages in Afghanistan’s mountains, collectively killing another 100 people, only re-enforced the need for our military operations to have the knowledge and skills required to better predict avalanches.
When both of these courses concluded, Fitz and I took great pride and pleasure in knowing that in some small way we may have helped our troops down the road on their next mountain deployment.
Posted by meteorologist Jim Woodmencey
Photos by Jim & USAF

One thought on “Avalanche & Weather Forecasting for Military Meteorologists”