Normally at end of the year, I like to review the weather highlights for the past 12 months. However, this December had so much weather to talk about, that I could easily fill this space with the highlights from this past month alone. Which is what I will do. Two weeks from now, in the next Mountain Weather column, I will give you the full review of the weather in Jackson Hole in 2016, with all of its high and low points.

The buzz about town, and at the ski areas, was how HUGE December was for snow. And it was big, by several different measures.

First, the Town of Jackson had above normal snowfall, with 23 inches recorded, compared to the average in town in December of 17 inches. That number for this December is a little low, because there was a day or two of missed readings due to the Holidays. In reality, town received more than 23 inches in December.

The Jackson Hole Mountain Resort’s Rendezvous Bowl weather station recorded 153 inches of snowfall in December, at the 9,580-ft. elevation. That makes December 2016 the second snowiest December in their recorded history. December 1996 is still the December to beat; it had 225 inches of snowfall, which was the largest monthly snowfall on the mountain, ever. By the way, the average in December at this site is 81 inches.

December 2016 and December 1996 were head-and-shoulders above normal for snow at the Jackson Hole Mountain Resort. Question is, will we have to wait another 20 years to see another December like this? 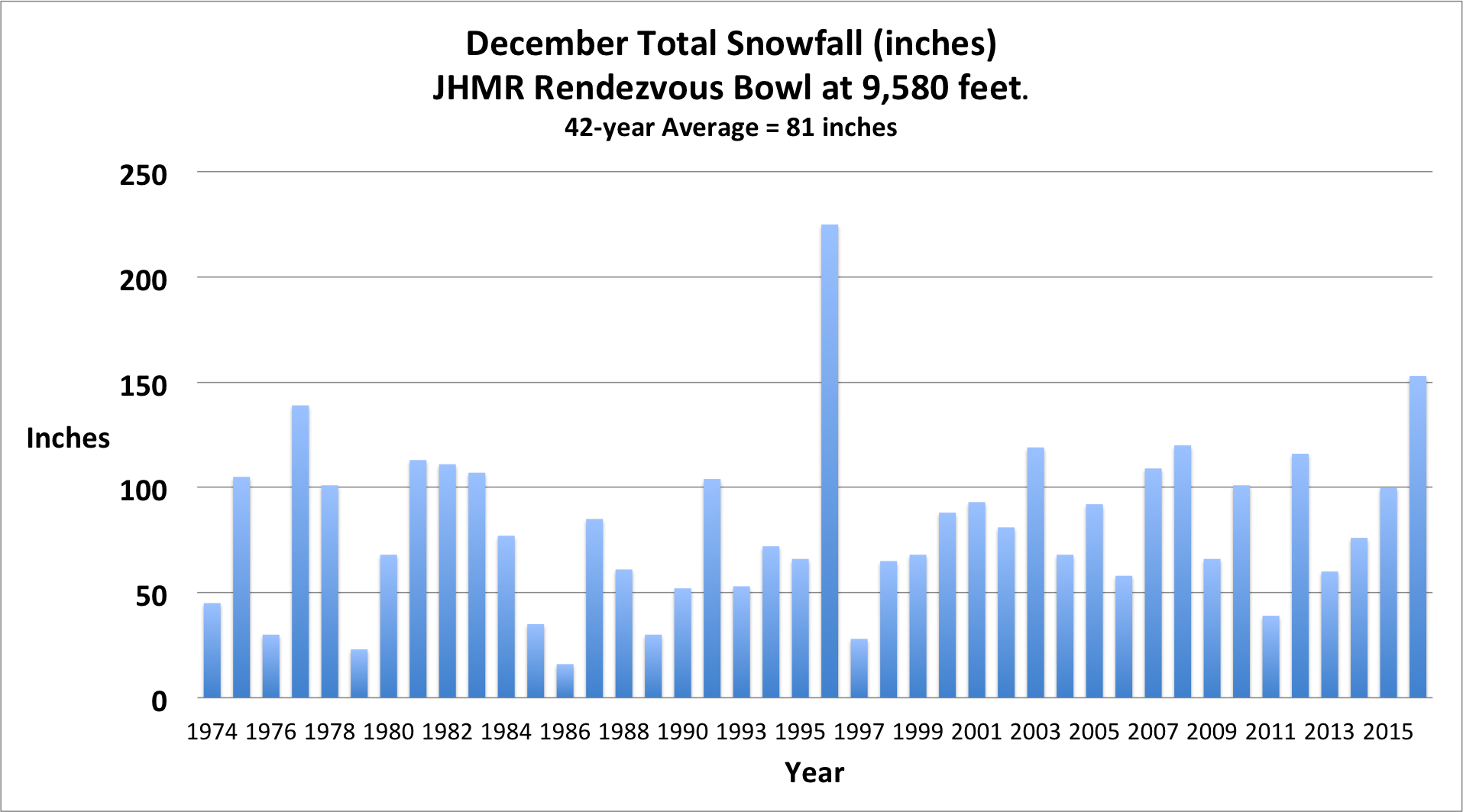 The other weather factor that left its signature this December was the temperatures. Wild swings from warm to cold are common, maybe once in a month, but not once a week! We experienced temperature changes in the valley of 40-degrees or more within a couple of days, on multiple occasions.

The coldest temperature we had in December 2016 was 24-below zero on the morning of December 8th. By the next day the afternoon high temperature was 35-degrees. The day after that, the high was 37 degrees, making for a 61-degree rise in temperature within two days.

What caused it all?

Most will say that it was La Nina that caused this cold & snowy December. That may have had something to do with it, and that is certainly the preferred short answer.

The longer, more technical answer is, that a zonal or westerly jet stream flow persisted across the Pacific and extended all the way across the Western United States for a good portion of the month.

That jet stream carried copious amounts of moisture inland from the Pacific, and when the jet was south of us, we were colder, and when it shifted north of us it got warm, with rain in the valley.

That jet stream is not continuous anymore, and a complex blocking pattern in the Pacific has slowed the flow and caused a split in the jet stream for the start of the New Year. It’s still a La Nina, that didn’t go anywhere, but the westerly flow and the big snow are on hold until the pattern changes again.

Jim is the chief meteorologist at mountainweather.com and has been forecasting the weather in Jackson Hole and the Teton Mountains for the last 25 years.