This is my annual summary of the weather for Jackson, WY for the year 2017. At the bottom of this post a re-cap of the weather highlights from 2017 in Jackson Hole.

All data included in this weather summary is taken from the Jackson Climate Station. The historic averages and totals are from the official records, including all years with complete data, between 1905 and 2016.

Much of that was due to the very wet & snowy months of January and February. However, September and November were also exceptionally wet, with more than double their respective averages for precipitation.

The wettest month of the year was February, with a massive 5.75 inches of water in town, from rain and snow combined. That broke the old February record of 2.83 inches in 1962, by a wide margin.  On average, February is usually one of the driest months of the year, averaging just 1.14 inches of precipitation.

The driest month of 2017 was August, with less than three-quarters of an inch of precipitation. 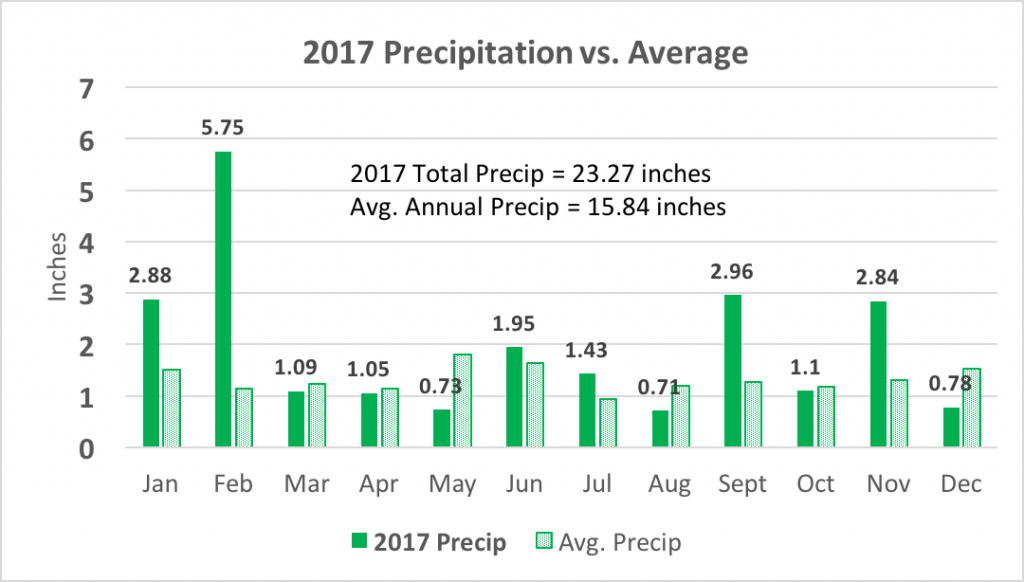 No one needs to be reminded that last winter was snowier than normal. January and February 2017 snowfall totals combined were almost twice the norm, 62 inches of snow fell in town those months, compared to an average total for these two months of 33 inches.

Other than that, October 2017 was the only other month for the rest of the year that saw above average snowfall.

We also don’t need to be reminded that December 2017 under-performed in the snowfall department, with just over 8 inches of snow for the month. That is about half of the long-term average snowfall for December, of 17 inches.

The total annual snowfall for Jackson in 2017 was 90 inches. Which actually includes parts of two winters. But, that was well above the long-term average annual snowfall in town of 77 inches. 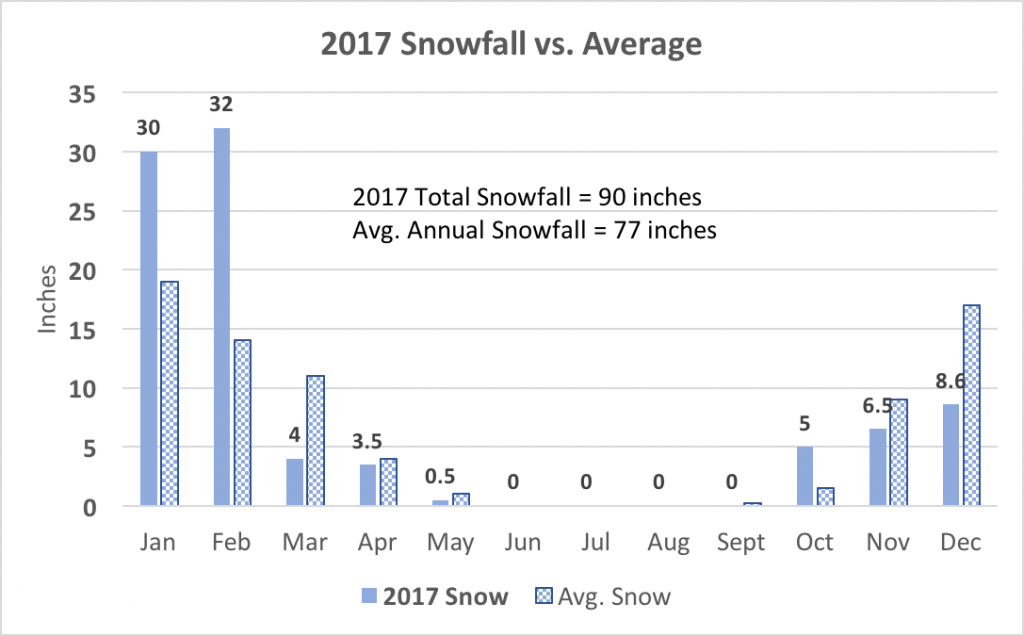 It was an interesting year temperature-wise in Jackson. Average high temperatures came in below normal 8 out of the 12 months. Whereas, average monthly low temperatures registered above normal 9 out of 12 months.

That is not surprising in a year that had above normal precipitation. A wet year usually translates to more cloud cover, and thus, cooler daytime temps and warmer overnight temps.

In the end, our annual average high temperature in 2017 was 52-degrees, or two degrees cooler than the average of 54-degrees.

The average low temperature for the entire year was 26-degrees, or 3 degrees warmer than the long-term average of 23-degrees. 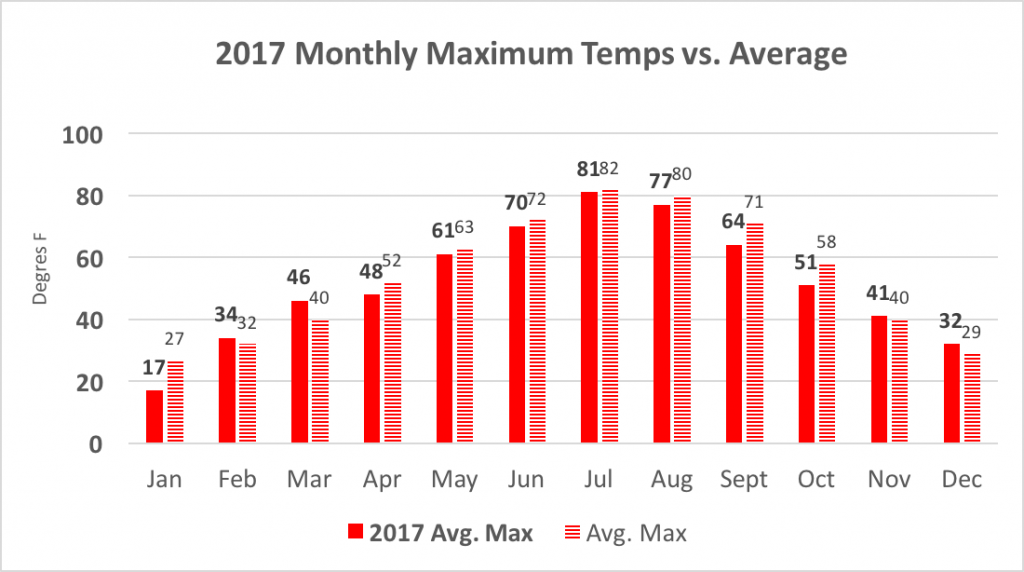 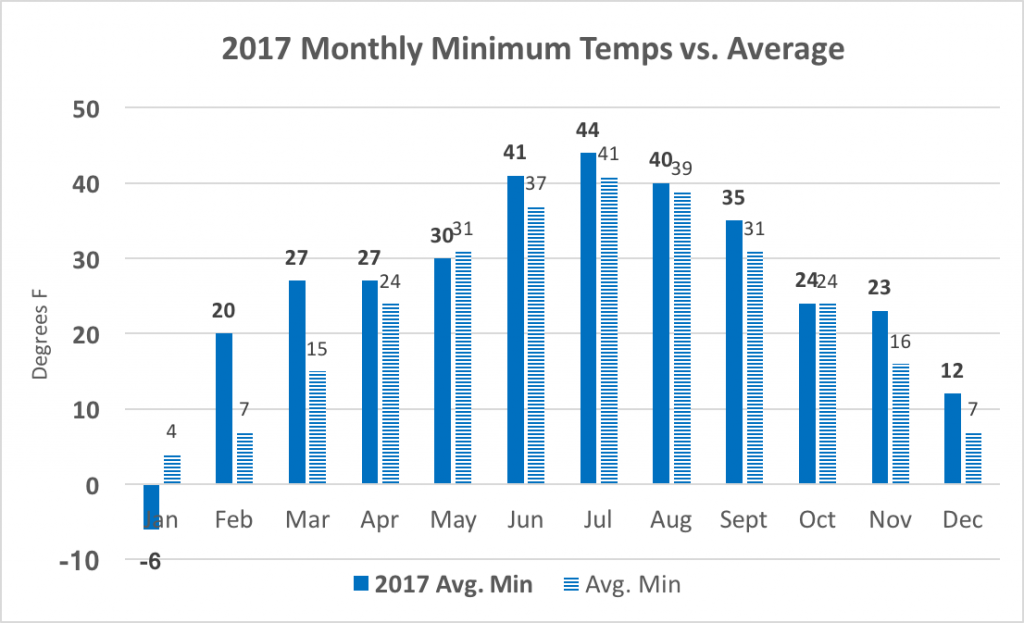 At the same time, 2017 managed to maintain what would be considered a perfectly normal range of temperatures. Annual mean temps were identical to 2016, and were also about as close as you can get to nailing the average annual temperature, from the last 100 years of data.

The Winter of 2016-17 re-set the bar for snowfall in the mountains. It also tested our limits for how much snow we really want to have to shovel or plow in the valley. Beginning in early December 2016, we went from a settled snow depth in town on December 1st of just one inch, to a depth of 18 inches on Christmas Day 2016.

January and February 2017 continued the trend of copious snowfall, tapering off early in March. Almost 100 inches of snow fell in town between December 1st, 2016 and April 1st, 2017. That is well above the average winter snowfall in town of 61 inches.

December and January also saw wild temperature swings. For instance: the low temperature in town on January 6th, 2017 was 32-degrees below zero, that was also the coldest day of 2017. On January 8th, the high temperature was 37-degrees, above zero. A 69-degree swing in two days!

Mountain snowfall was nothing short of huge last winter. At the Jackson Hole Mountain Resort, during the “ski season”, between December 1st, 2016 and April 1st, 2017, the total snowfall was 462 inches. That was from the Rendezvous Bowl study plot at 9,580-feet, which averages 301 inches of snow for this same time period. The only bigger “ski season” snowfall was in 1996-97 with 486 inches. That was twenty years ago.

Total snowfall in Rendezvous Bowl during February alone was 149 inches, making that the snowiest February ever on the mountain.

The single biggest weather event of winter was the storm that toppled the transmission lines on the Teton Village road on February 7th, 2017, during a winter storm cycle like we hadn’t seen since February 1986, some 30 years ago. 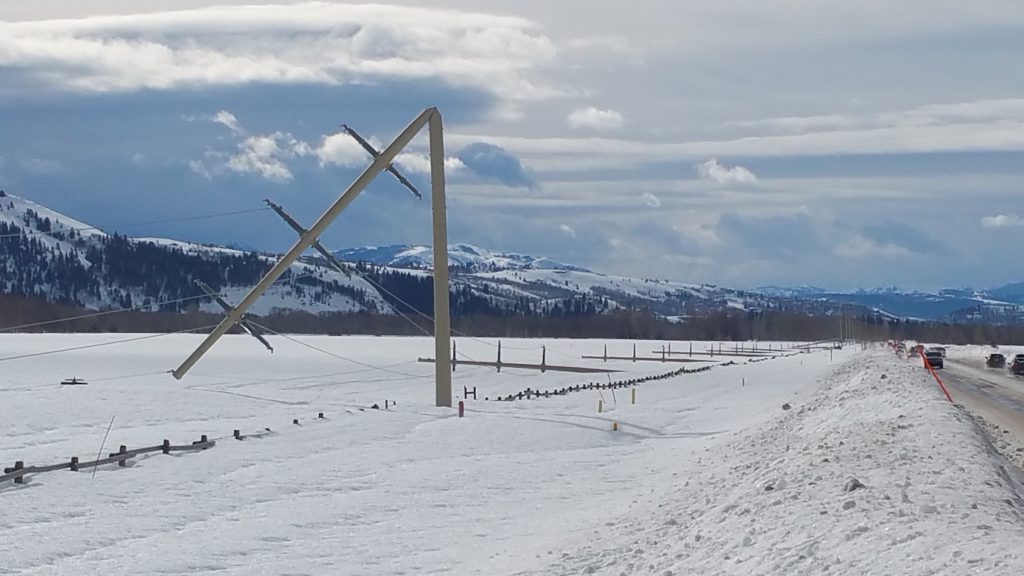 Cold and snowy weather most of the winter, gave way to an early spring. Warmer than normal temperatures in March of 2017 essentially vaporized the snow in the valley. We began the month with 14 inches of settled snow on the ground in town. By March 18th, it was all gone.

Snow was still accumulating in the mountains into April. Enough to push the total winter snowfall number, from October 1st to April 9th, in Rendezvous Bowl to a record 590 inches. That edged out the old record of 585 inches from 1996-97, for that same time period.

April and May 2017 both ended up cooler than normal, but drier than average, in town.

That theme of cooler-than-normal temperatures extended through the summer. June, July and August all experienced below normal high temperatures.  The hottest day of the year came on the Fifth of July, when it hit 89-degrees in town.

June and July were both wetter than normal, while August was quite dry. August was also a smoky month, from forest fires burning to the west of us in California, Idaho and Montana. People worried that the smoke would be around and ruin the biggest event of the summer.

The Total Solar Eclipse on August 21st, 2017 was that event, and a very weather dependent one. Luckily the smoke had departed before the big day. However, a band of high overcast clouds came over Northwest Wyoming very early that morning, which could have potentially dimmed the viewing experience.

Fortunately, those clouds exited off to the southeast of Jackson Hole an hour or so before the start of the eclipse, and we had as clear of view of this incredible spectacle as you could hope for.

With that cold, came our first dump of snow in the mountains, coating them completely white, top to bottom. September went on to be much wetter than normal in town with almost 3 inches of water, more than making up for a dry August.

October was near normal precipitation-wise, then November stepped up to register almost twice the average precipitation. Temperature-wise, September and October were both colder than average. November was just above average.

We shoveled snow in town in both October and November, and backcountry skiing commenced very early this fall on Teton Pass. Snow depths reported at the upper elevations of the Jackson Hole Mountain Resort exceeded four feet by Thanksgiving.

A drought early this December, with no new snow between December 6th and 13th, 2017, had folks worried about a brown Christmas. Snow during the days leading up to Christmas weekend helped the skiing conditions up high, and provided a White Christmas in town.

Along with milder temperatures, it was certainly a much different December than we had in 2016.

Jim is the chief meteorologist at mountainweather.com and has been forecasting the weather in Jackson Hole and the Teton Range for the past 25 years.

Note: The contents of this post first appeared in the Jackson Hole News & Guide On January 3rd & January 17th, 2018.