This past week has been warmer than normal over much of the Western United States, warm at least for late May and early June. In Jackson Hole we just had a string of days topping 80 degrees, 82-degrees for a high temp in town on May 29, 30 & 3, 2020. Looks like we’ll be back to around that same temp at the end of this week. Then, it gets abnormally cold for early June.

None of that was record high territory, but it sure feels warm for this time of year. Back in 2003 Jackson had a high of 90-degrees on May 29th and in 1988 there was a a couple of days in the first week of June that tagged 89-degrees.

This weekend and into early next week is looking much cooler and also it looks like we’ll get some precipitation  this weekend, something that was lacking most of May.

A very cold Low-pressure system that is sitting in the Gulf of Alaska is going to slow-roll its way across the Pacific Northwest at the end of this week. A stronger southerly flow aloft ahead of that Low will bring the warm temps up from the Desert Southwest on Friday. Then the cooling begins Saturday through Monday. 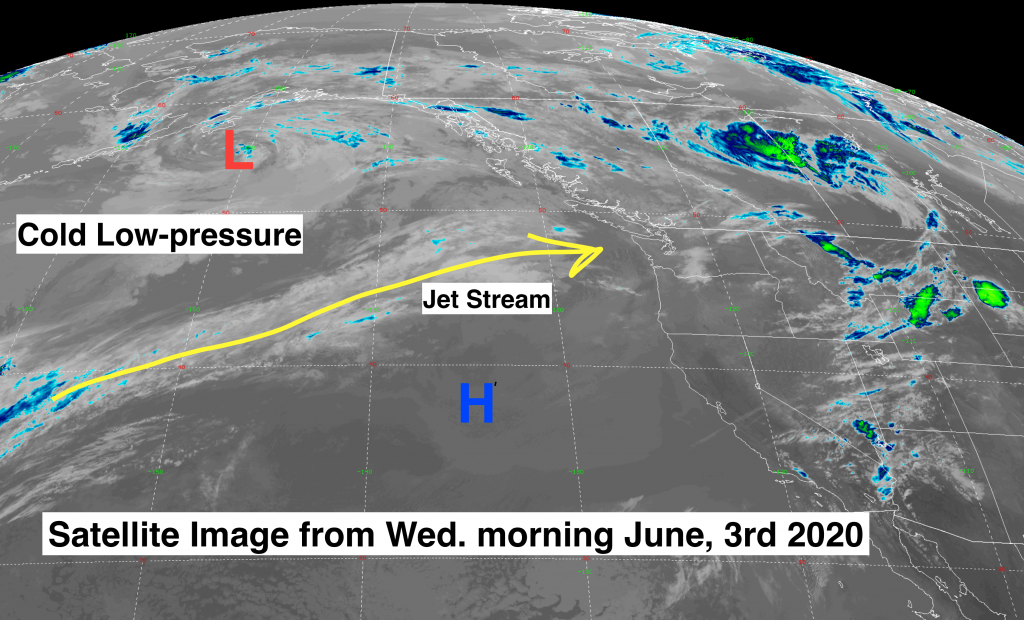 We could see a drop in temperatures of almost 40-degrees, based on daytime highs. That means by Monday, June 8th, the high temps in Jackson might not get out of the 40’s! The number to beat on that date is a high of only 43-degrees, which occurred here in 1950, for a record cold maximum temp.

Mountain temperatures have been very warm this past week, as well. Highs at the top of the Tram at Jackson Hole Mountain Resort were tagging 60-degrees this past weekend, with overnight lows temps in the 40’s up there. The freezing level during the day were was above the summit of the Grand Teton (14,000-ft. +).

CLICK image below to play video of computer model forecast.

This has led to a pretty good melt-down of the snowpack and subsequent run-off into the creeks and rivers. That will all screech to a halt after this weekend. Looks like by Monday the temperatures will not get above freezing at 10,000-ft.

Hope you didn’t get too used to the warm, because it is about the swing in the other direction.

Keep up with the latest forecast info for Jackson Hole and the Teton Mountains as the weather this weekend goes through these changes: Click for JH Forecast