We were getting a little bit of moisture from the Desert Southwest Monsoon this week, causing some thunderstorms around the area. And it looks like we may get another surge of that monsoon moisture again this coming week.

If you happen to listen to my forecast rap in the mornings on the radio (KZ95 95.3 FM & KJAX 93.3 FM) you will frequently hear me mention “monsoon moisture”, during the summer months. In this week’s blog entry I’d like to explain exactly what that means.

The term “monsoon” comes from the Arabic word mausim, which means “a season”. It refers to the large-scale wind flow that lasts for a whole season near the Indian Ocean and the Arabian Sea.

A “monsoon”, therefore, is simply a seasonal wind flow pattern. The Desert Southwest Monsoon that occurs in the United States is similar to the Asian Monsoon that affects India and the Himalayas during this same time of year, from July to early September.

The North American version of the monsoon originates over the interior of Mexico, where very moist (i.e. humid), tropical air is converging over the land from the Pacific Ocean to the west and from the Gulf of Mexico to the east. That moisture is then drawn northward by southerly winds over the hot, dry deserts of the Southwest. This causes frequent strong thunderstorms over New Mexico and Arizona.

Often in July and August the monsoon will surge up into Utah and Colorado, causing thunderstorms over the deserts of southern Utah and western Colorado. Some of these thunderstorms create flash flooding situations in the canyon country of the Southwest.

A few times a summer that monsoon moisture will reach as far north as Northwest Wyoming and Southwest Montana, causing thunderstorms here, which are often some of the strongest of the summer season.

The typical weather pattern that sets up in July and August that will bring transport the monsoon moisture this far north is when a thermal Low pressure (dry low pressure caused by heating) develops over southeast California and western Arizona, at the same time High pressure develops over eastern Texas. Then when a Low pressure system or upper level Trof of Low pressure moves into the Northwest U.S., that helps draw that monsoon moisture northward. (See example map below of this weather situation). 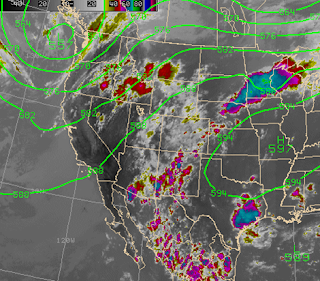 Difference in Type of Thunderstorms

Whenever there is enough moisture and instability in the atmosphere (that varies from day to day) cumulus clouds will develop as the ground gets heated by the sun in the afternoon. These airmass thunderstorms, or garden variety afternoon thunderstorms, will occur between 2:00 PM to 5:00 PM, or sometimes into the early evening hours.

Thunderstorms generated by the monsoon can occur anytime of the day or night. They are more random in nature, kind of like a drive-by shooting, you never quite sure where or when they are going to hit.

This makes for a challenging forecast situation, as the development of thunderstorms is dependent upon whether or not that monsoon moisture gets over your location. Often times we end up on the very northern edge of that moisture here in Jackson Hole, with thunderstorms just south of us.

Last week was a good example of that in action. Tuesday we got a surge, and had thunderstorms in the south end of the valley, but nothing really north of the Airport.

(See the Satellite Imagery in the graphic, click image for loop from Tuesday afternoon.)

On Wednesday, the monsoon moisture retreated a little further south and we had no thunderstorms here. Thursday and early Friday it surged back up and got close, with a few thunderstorms nearby.