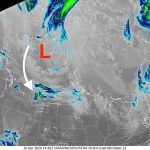 It’s springtime in the Rockies and that means wild weather swings are bound to occur. This week brought high temperatures in the 50’s on Tuesday & Wednesday to Jackson Hole. Then, a perfectly sunny day with no wind on Thursday and temperatures topping 60-degrees in the Town of Jackson. That nice taste of spring weather … END_OF_DOCUMENT_TOKEN_TO_BE_REPLACED 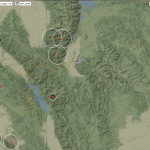 On the night of April 5th, 2020 , moist & unstable air moved over western Wyoming causing thunderstorms and a relatively intense graupel event (round, puffy pellets of snow). In combination, this would be termed a “Thundersnow” event.  Infra-red Satellite image below showing the bright green “cell” that contained those thunderstorms from Sunday night. Thundersnow … END_OF_DOCUMENT_TOKEN_TO_BE_REPLACED 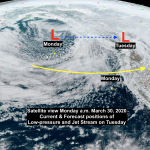 A potent storm system in the Gulf of Alaska will bring snow to the mountains of the Pacific Northwest and Northern Rockies today through Tuesday, lingering into April Fool’s Day. Map below shows position of Low-pressure Monday, March 30th and forecast position on Tuesday March 31st. Jet stream also pushes inland across Oregon, Idaho and … END_OF_DOCUMENT_TOKEN_TO_BE_REPLACED 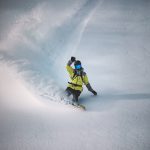 The “meteorological” winter season is officially ended, defined by the months of December, January and February. The astronomical winter season, which began on the Winter Solstice (December 21st, 2019), runs until the Spring Equinox on March 19th this year. Below is a re-cap of all the highs and lows and snow that we experienced here … END_OF_DOCUMENT_TOKEN_TO_BE_REPLACED

On the last day of this Corona-Virus-shortened ski season the Town of Jackson and the Jackson Hole Mountain Resort both broke snowfall records. That happened just when we thought spring was arriving early this March. Town Snowfall Record:12 inches of new snow was recorded at the Jackson Climate Station on the morning of March 15th, … END_OF_DOCUMENT_TOKEN_TO_BE_REPLACED 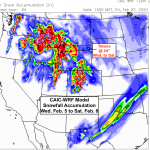 Snow in a Northwest Flow

You may not be aware of it, but today, February 5th is National Weatherpersons Day. Celebrate with your favorite meteorologist, buy him or her a beer! This is also the beginning of a steady Northwesterly flow or “Dirty Ridge” event for the northern Rockies. As a Ridge of High pressure parks off the West Coast … END_OF_DOCUMENT_TOKEN_TO_BE_REPLACED 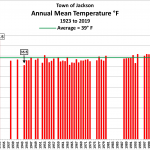 If you lived in Jackson for the last 12 months or so and I were to ask you to name three things you remember about the weather in 2019, the top three answers likely would be: 1) February was really snowy. 2) Summer was too short. 3) October was really cold. Correct on all counts. … END_OF_DOCUMENT_TOKEN_TO_BE_REPLACED 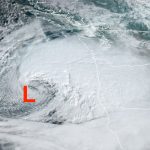 If you are a frequent Weather Channel watcher, you have probably heard the terms they use to describe a variety of winter storms, such as, “Atmospheric Rivers”, “Polar Vortexes” and “Bomb Cyclones”. All of which sound quite ominous! It reminds me of that line in the Wizard of Oz, “Lions and Tigers and Bears, Oh … END_OF_DOCUMENT_TOKEN_TO_BE_REPLACED 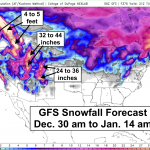 New Snow for the New Year

Low-pressure systems have been swinging across the Southwestern U.S. this past week or so, but leaving the northern & central Rockies to catch the fringes of those weather systems. That is about to change, for the start of the New Year. Current Weather Pattern This series of 700mb maps (@10,000-ft.) shows the transition of the … END_OF_DOCUMENT_TOKEN_TO_BE_REPLACED 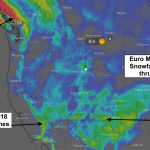 The outlook for fresh powder in the Western United States between Christmas and New Year’s Day is not looking too cheery for many locations. A split jet stream flow in the Pacific will send three separate Low pressure systems on a southerly track across the Southwestern U.S. That will favor the southern Sierra Nevada (Mammoth) … END_OF_DOCUMENT_TOKEN_TO_BE_REPLACED